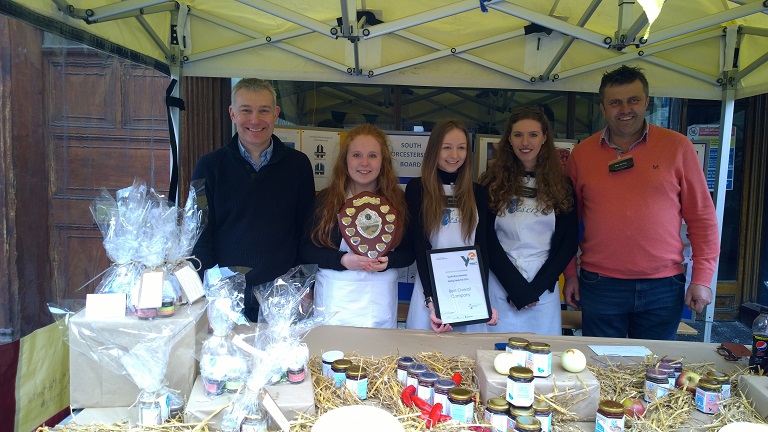 A talented group of Evesham school pupils who set up a company selling jams and chutneys are benefiting from mentoring from local businessman Peter Heming.

The youngsters were recently voted overall runners-up at the YE Herefordshire and Worcestershire finals, as well as winners of the Team Work award, after winning the qualifying trophy and prize for the best use of IT and Technology. In March they won ‘best overall company’ prize at the Young Enterprise South Worcestershire Spring Fair.

Mr Heming, who was named Young Enterprise South Worcestershire Business Advisor of the Year in 2014, said: “I gain enormous satisfaction from this advisory role. This is a very talented team of youngsters with a bright future. I pass on advice about how to run a business, including marketing skills, and how to remain focused. For me it’s about giving something back to the local community. I have acted as a YE Advisor to four local schools over the last six years.”

Faith Williamson, the 16-year-old Managing Director of Henry’s Preserves, said: “We were really pleased to have progressed far in the YE competition and the support and encouragement we have received from an experienced businessman like Peter Heming has been invaluable.”

The Henry’s Preserves food range is sold at farm shops and street fairs across the Vale and Worcestershire.

Mr Heming is a firm believer in investing in youth in the workplace. As well as his demanding job running 40 employee Heming Group, he sponsors and contributes fully to Worcestershire networking group Apprentices in Business (AiB) in addition to his work with YE.

One of the Heming Group companies Ford Electrical presently has three apprentices on its books training as electricians. Other companies in the group, which has been trading nearly 50 years, are Heming Civil Engineering and Construction Contractors, Major Building Services and Heming Agricultural and Plant Engineers.