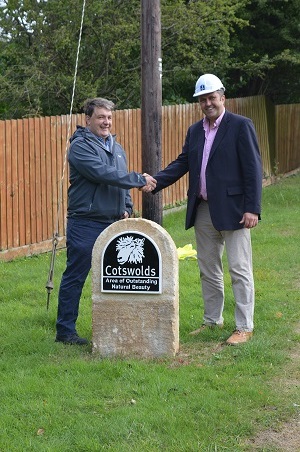 HEMING GROUP ‘LAYS DOWN ITS MARKER’ IN COTSWOLDS AONB

Family-run civil engineering and construction company, Heming Group, is delighted to have played a part in enhancing the ‘visitor experience’ to the Cotswolds Area of Outstanding Beauty (AONB).

Heming Group, which is based in Willersey, near Broadway, won the contract to erect four gateway marker stones in the AONB, which celebrates its 50th anniversary this year.

The Cotswolds Conservation Board, the body tasked with conserving and enhancing the natural beauty of the AONB, decided the anniversary would be an ideal opportunity to introduce the additional stones in Gloucestershire.

Another 29 marker stones are dotted around the AONB, which stretches around 100 miles from Bath and Wiltshire in the south, through Gloucestershire and Oxfordshire, to Warwickshire and Worcestershire in the north.

The new marker stones are located at:

The A40 on leaving Cheltenham at Charlton Kings

The Cirencester Road on leaving Cheltenham

The A46 on leaving Stroud towards Painswick

Peter Heming, Managing Director of Heming Group, which itself is nearing its 50th anniversary, said: “The Cotswolds is acknowledged as one of the most beautiful areas of England and the new markers stones will help conserve and raise awareness of the natural beauty of the area for now and future generations.

“Heming Group prides itself on close attention to detail and the highest standards of customer service for all its clients. The company was very pleased to have made a contribution to the gateway marker stone programme”

A programme to erect gateway marker stones and signs on the entrance boundaries into the AONB was introduced in 2001.

Only routes that could safely accommodate a gateway marker stone on a wide grass verge were shortlisted for the latest additions. The design of the stones and plaques is similar to the traditional stone cut mile posts already present on the outskirts of the AONB.

Covering 790 square miles, the Cotswolds AONB is the largest of 38 Areas of Outstanding Natural Beauty in England and Wales and is admired worldwide for its stone walls and buildings, open skies, rolling grasslands, beach woods and captivating villages. The uniqueness and value of the Cotswolds is shown in the fact that five European Special Areas of Conservation, three National Nature Reserves and more than 80 sites of Special Scientific Interest are within the AONB.