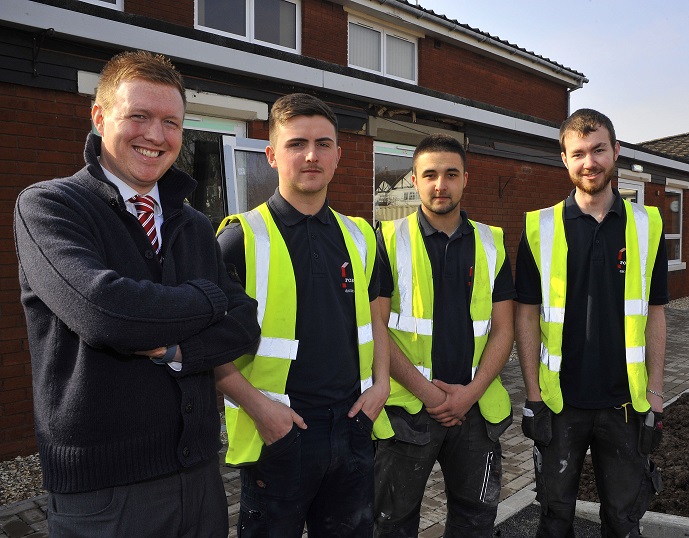 Bright spark George Anderson is celebrating after being voted one of the top electrical apprentices in the country.

The 19-year-old, from Evesham, who works at Ford Electrical, in Willersey, near Broadway, was named runner-up in the prestigious Electrical Industry Awards ‘Apprentice of the Year’ category.

George, who received his award at the showpiece event held recently in London, said: “This was one of the proudest moments of my life considering I faced tough competition from throughout the country.”

George was nominated for the Electrical Industry Awards by Ford Electrical’s Operations Director Jack England, who described the talented youngster as an “outstanding apprentice.”

“I simply didn’t want a large debt by going to university and believed an apprenticeship would give me a job for life as well as a rewarding career,” said George.  “I first thought about becoming a mechanic, as I love motorbikes and I used to race.  But, when I was offered an apprenticeship with Ford Electrical, I jumped at the chance.  Once I qualify as an electrician, the world is my oyster.”

“It’s really challenging work, but I love it,” added George.  “One week, I could be working in a school, the next a complete re-install at a council-run residential home for elderly people.  I still remember my first time on-site – Abbey Wood Primary School in Redditch.  It was a massive job and at 16 I was a bit overawed. I also had to get used to the banter on-site.  But I got on with it and three years on, I’m glad I did.

“Over the last three years, my apprenticeship has been so varied.  I’ve built a broad range of technical knowledge and practical skills, enabling me to carry out all tasks safely and correctly.”

George currently attends a local college once a week to help complete his NVQ qualification – a mix of theory and practical learning – and the rest of his time spent working on-site for his employer on a variety of contracts.

He has already been offered a full-time job at the end of his apprenticeship next September.

To ensure George reaches the very highest standards, Ford Electrical also partners with external assessor and national training provider, JLT Training, to ensure he continues to reach the required standard throughout his training and ultimately gain the NVQ Level 3 in Electro Technical Services.

Jack England said: “George has progressed quicker than any other apprentice I’ve ever known and that includes myself!  He has a mature and common sense approach beyond his years, always turns up and never, ever lets us down.  He’s become an integral part of the team.

“George is incredibly keen, always asking questions, and will without doubt, soon become a highly-skilled, fully competent electrician.  With his confident people skills and maturity, he could very well go on to work for himself in the future.”

Peter Heming, Managing Director of the 40-employee Heming Group, of which Ford Electrical is part of, in addition to Major Refrigeration and Air Conditioning Services, Major Building Supplies – which includes a recently launched domestic plumbing division, Heming Civil Engineering and Construction Contractors and Heming Agricultural and Plant Engineers, is also a firm believer in the value of apprenticeships. This is reflected in his keen involvement with Apprentices in Business (AiB), a

Worcestershire-based networking group, and he also mentors local teenagers in business skills in his capacity as an official advisor to Young Enterprise (YE).

Peter said: “You can definitely nurture a willing spirit and George Anderson is a case in point.  You don’t have to go to university to get ahead in life and George’s success to date shows just what an important role he will undoubtedly play in the future of our business.”

Ford Electrical has been getting used to the winning feeling in 2016 after scooping the ‘Small Employer of the Year’ category in July at the 2016 Gloucester Citizen and Gloucestershire Echo Apprenticeship Awards.

Since its launch in 1991, fast-growing Ford Electrical has continued to excel in state-of-the-art modern electrical project design and installation and maintenance for commercial and industrial projects across the Midlands and beyond.